Season starts with a win! 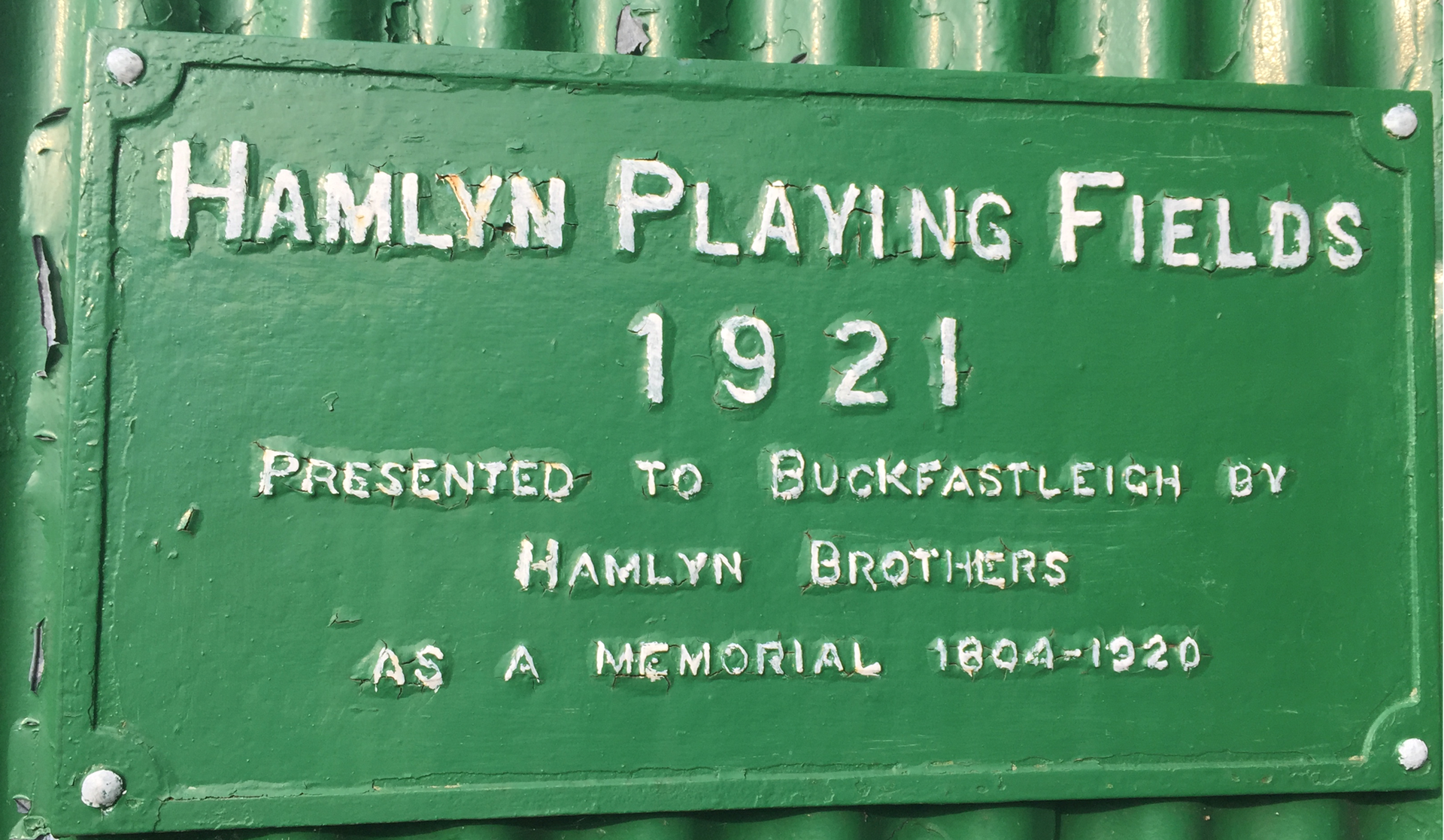 The club was formed after land was gifted by the Hamlyn Family in 1921 for recreational purposes thus providing a three tier bowling rink and three tennis courts and allotments. Originally our green consisted of six rinks on three levels, although during World War 2 the lowest level was turned into allotments.

Initially the club was a men only club, but on 27th November 1958 the Buckfastleigh Woman's Bowling Club was formed.

A six rink green with an automatic watering system as well as a new pavilion was built in 1988, this was extended and the interior modernised mostly by members in 2011.

This is now a thriving club with the men's team in the Mid Devon League and a ladies team, who play in two leagues, the Plymouth and District and the South Devon Ladies Bowling League.

Below is a photograph of the Hamlyn park shed, which later became the club pavilion. It now serves as the ladies and men's changing rooms.

The following are some notes written by Brian Norman when the "History of Buckfastleigh" was being written. They are circa 2000.

Land was donated to Buckfastleigh Townspeople by the Hamlyn family as a memorial. (Hamlyn’s were local mill owners and employers). There is a plaque on the end of the old bowling club pavilion, now the changing rooms.

Tennis Club and Bowling Club formed – courts and bowling green built by keen locals, with no assistance from the Buckfastleigh Urban District Council.

5/6 rink bowling green on 3 tiers (2+2+2 rinks). Turf cut and brought to field from Dartmoor by horse and cart and laid and levelled by keen amateurs.

Teignbridge Public Health Inspector threatened to close the bowling green through public health risk from discharge and grossly inadequate toilets. This would have been a political bombshell to TDC. They volunteered to build a public convenience in corner of playing field. Buckfastleigh Bowling Club suggested building a small pavilion (with toilets en suite) similar to the one recently built at Kingsteignton by TDC. Bait accepted!!

Planning and Building Regulations approval obtained BUT BBC suggested that the new pavilion be enlarged to accommodate a 6 rink green in the event of the green being enlarged at a later date. A larger pavilion was approved subject to an amalgamation of tennis club and bowling club sharing new facility AND the new association contributing towards the cost of the enlargement.

The Hamlyn Playing Fields Association was formed with a small management committee (trustees) being derived from both clubs (and any other organisation using the pavilion facility).

New pavilion with HPFA contributing 20% of the total cost. Monies were derived from The Sports Council, The Devon Playing Fields Association, Buckfastleigh Town Council, local traders, tennis and bowling club members. Loans and donations were obtained from members and The Devon County Bowling Association and other clubs.

At the instigation of the bowling club a 200 club was formed to raise money – 200 people would contribute £1 a week with a draw every quarter when 50% of the takings would be paid as prize money, the remaining 50% will be paid into club funds to assist in the payment of loans and to finance the building programme. This was very successful and all loans and costs were paid off within 2 years.

The 200 club still continues as a fund raising activity but membership has dwindled dramatically.

Excavated material from the construction of the new pavilion was tipped and consolidated below the lower terrace of the bowling green to build up levels to enable the middle terrace to be extended to 4 rinks in due course.

TDC volunteered to complete and turf the 4 rink green, limited funds having become available within the leisure budget of TDC. BBC welcomed the offer but suggested that it would be preferable if this money could be put towards a levelling programme for the whole green to make a 6 rink flat green and dispense with the existing terraces. BBC obtained a quotation for the work (minimum specification) from John Churchwood of Kerswell Gardens Ltd. – they had recently successfully completed a new green at Watts Blake & Bearne, Newton Abbot.

George Sydenham, Sports and Recreation Officer of TDC, cautiously accepted the proposal subject again to BBC meeting a proportion of the costs. After protracted negotiations and frantic fund raising by BBC (same sources as before), the green was re-levelled and re-laid by Kerswell Gardens. The contract excluded perimeter ditches, pavings, retaining walls, fences and landscaping. All those works were subsequently completed later by the bowling club themselves (mainly Vic Manfield) with the majority of the materials being acquired by or from TDC and Devon County Council. Initially the new grass was watered by second hand equipment, ex Sir Francis Drake Bowling Club, Plymouth.

Before the perimeter pavings were laid, the bowling club obtained a quotation for an automatic watering arrangement for the new green from Slurry and Irrigation Systems Ltd. – the work to be undertaken in two phases – firstly the laying of all the pipework before pavings were laid and the second phase – the installation of equipment, tank, pumps and electrics would be undertaken at a later date as funds became available!

The work necessitated the provision of a new electrical supply with a heavy armoured cable by SWEB. When completed it was possible to install electric light in the old pavilion.

The new green could not be played on for 12 months – during this time league fixtures were played as double “away” matches – all clubs in all leagues were very helpful and even our own club competitions were able to be played at Kingsbridge B. C. at their suggestion.

Thanks to the generosity of many of the clubs in the MDL, several small donations were received towards our rebuilding programme. Specific sponsors were Bovey Tracey, Upton and Babbacombe Bowling Clubs.

The new green was formally opened by the Chairman of TDC and guests included the President of DCBA, our own Mayor, the District Engineer and George Sydenham, Sports and Recreation Officer of TDC, who had been so helpful in achieving both the 6 rink green and a new pavilion to boot.

Vic Manfield, our groundsman, was a tower of strength during construction works. He not only helped the main green laying contractor, he also laid the new ditches, pavings, fences and physically built the heavy retaining wall from the old pavilion to the corner of the filled area. The materials for this wall were acquired, free of charge, from DCC and comprised heavy salvaged concrete road kerbs which were to have been scrapped. Vic undertook this walling exclusively on his own and thanks to his herculean efforts, the new green has not subsided even marginally.

The progressive acquisition of machinery to maintain the green necessitated a larger and dryer groundsmans store and workshop. Brian Norman produced the necessary drawings and obtained the necessary planning and building regulation approvals and thanks to the 200 club the necessary funds were eventually made available. Tenders were obtained and the work was undertaken by Peter Williams, the local builders, at a very competitive cost.

Final decorations, pavings and finishings were undertaken by the club members themselves, but mainly by Vic Manfield.

The aluminium flagpole with gold truck was donated by Torquay Bowling Club and a sprinkler watering system, invaluable when the new turf was laid, was obtained virtually free of charge from old friends at the Sir Francis Drake Bowling Club in Plymouth.

Our main score board was made by Brian Norman from materials acquired from Blight & Scoble.

Rink scoreboards were also made and donated by Brian Norman.

Landscaping around the green was carried out by various members and the beds of white and red roses were financed by the lady bowlers.

The green is maintained by Vic Manfield and the gardens and shrubberies by Jeanne Pinney.